Last month I went on my first ever ski holiday. I had missed out on the school trips as a teenager and well the opportunity had never come up before. I have to say I was nervous, scared even but not of the idea of skiing (although that did spook me a fair bit). No, the first thing to cross my mind was “what the hell do I take?” followed swiftly by “will I actually need to take a full on suitcase?” as most of my previous holidays involved either hand luggage only or a shared suitcase.

I had months to worry. All that time to try to research, I asked friends who had been before and spent hours looking at photos trying to figure out what people wore on these skiing vacations. To me it felt like I would need a massive suitcase and several bags. It all came flooding in and tried to overwhelm me. Packing for a cold weather holiday had never happened to me before. It was alien. Normally I would throw together a heap of sun-dresses, shorts and flip-flops and have plenty of room for goodies picked up abroad.

Other thoughts started to occur to me. “What would a normal day entail?” This made me question if I needed two changes of clothes for each day and the thought of an ever-growing suitcase really started to weigh down on me. I like to be organised and knowing what I would expect would help me figure this out. I had absolutely no idea what was awaiting me.

Thankfully after lots of calls to my family (who were also coming on the holiday) I began to put together a list of things that I needed and stuck it to the fridge.

Once I had the list to work to things became much easier. About 2 weeks before I prepared a pile of clothes I wanted to take and popped my toiletries into a bag and kept them altogether.

I had several thermal tops that I had bought a few winters back from Uniqlo. I dug out leggings and warm, thick tights that would be fine to wear under my ski pants or salopettes. I looked for old ski socks that my mum gave me for wearing with my boots and purchased a couple of new pairs. A wool beanie hat went into the pile.

I soon realised that I could easily just pack a hoodie, some tees and a couple of mini skirts to wear with my leggings for when I wasn’t skiing. I decided against jeans as they can easily get soaked through and tights and leggings are much easier to hand wash.

A friend of a friend told a great story about her first ski trip. She had no idea how much stuff she needed so bought a different ski jacket and pants for each day of her holiday! I’m glad I didn’t make that mistake. Her luggage must have been massive!

For everything else that I needed I shopped online. TKMaxx to the rescue. I bought a lovely O’Neil jacket and Surfanic pants for less than £60 in total.

Once on holiday I ended up borrowing several other things from my family who have been skiing before. 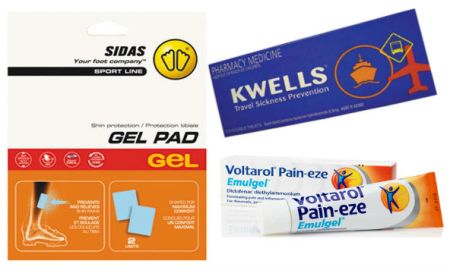 The tablets were needed for the long coach journey as we travelled up the windy mountain roads. The Voltarol took away all the pain and aches I got from bailing in the snow and also from where the boots rubbed and had I prepared before and bought gel pads to wear on my shins I probably would have avoided some of the first day ski boot pain. I wore them everyday and they really made the difference in comfort. They are now my secret weapon when wearing new pairs of shoes out for the first time for preventing my heels from rubbing away 😉

Making sure that I was organised took away some of the fear that I had about going skiing.

Is there anything you would always recommend taking on a ski or any other holiday for that matter?