Everyone must have one. An album that they played over and over and to this day still evokes happy memories and images that seem as clear today as they were when they were first formed.

For me Now That’s What I Call Music 5 gets me all nostalgic. I think I was given it as a present and can always remember the cover with funky looking music loving pig on the front of the tape (yup tape. I was a child born in the late 70’s). Look at his cool lollipop sticking out over his ear. And his retro shades. Amazing. 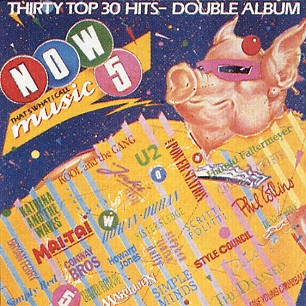 Two tapes filled with pop hits, some that evoke such strong childhood memories, taking me back to a specific place where I can almost touch my surroundings and remember how I felt. Others I hated them and still pretty much dislike to this day.

Some of my favourite tracks include Kayleigh by Marillion, Slave to Love by Bryan Ferry and Out in the Fields by Gary Moore and Phil Lynott which has a quality (bad) video.

The one song that I must have re-winded over and over again to listen to was Frankie by Sister Sledge. I swear my mum probably hates it as I played it so much, prancing round my mum’s bedroom dressed up with heaps of bangles on my wrists and a cheap plastic ring on each finger as I was trying to emulate Madonna’s look which is kind of funny for a child (I had no idea what most of her songs were about till about ten years later…oh hey didn’t I try to recreate this look for fancy dress recently…yes I did). 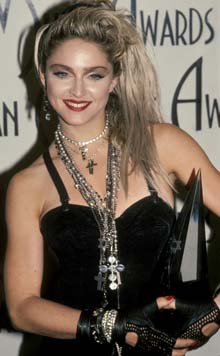 Thinking about it, 1985 actually marks a point where a lot of my music taste was set it seems. It was the year I first heard  A-Ha and I still love their music now. Depeche Mode, New Order, Tears for Fears, Bobby Womack all had albums out in 1985…

But back to Now 5, it seems silly that even now I have an urge to dig it out and play it even though I could easily queue up the tracks on Spotify. It’s just that the tape itself is sentimental and is part of the experience of playing it. Plus it was always fun slowing it down or speeding it up.

Am I the only one who is sentimental about something as trivial as a tape? I’d love to know what item from your past brings it all back to you.

2 thoughts on “An album close to my heart…”